APA citation style for statutes is constructed with the following elements:

Citing a government report is similar to citing a book. Often the author will be the government agency. If there is a specific report number available reference, include it in parentheses after the title.

Author, A. A. (Year, Month Day). Title of article. Title of Newspaper. https://www.someaddress.com/full/url/

It is increasingly important to cite your data sources, just like you would normally cite a journal article that you used to support your research.

Here is an example of a data set citation from the APA Blog:

Tools like PsycINFO, Google Scholar, and other databases provide you with APA formatted references, but always remember to double-check them -- often there will be a couple details that need to be corrected.

In PsycINFO, select the items you want citations for, then click "Cite" in the upper toolbar. In Google Scholar, click "Cite" for the individual article in the results list: 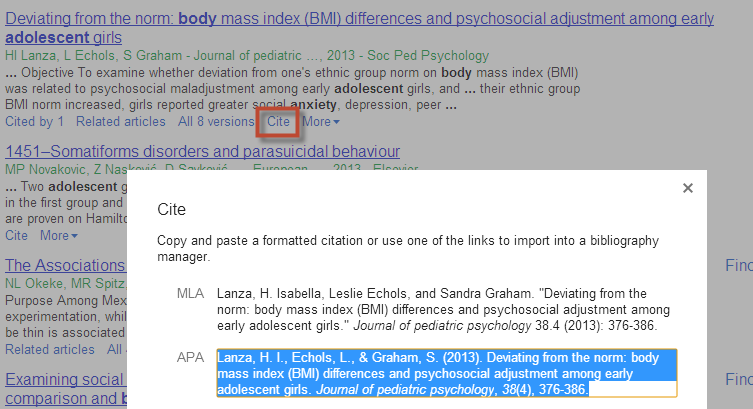 Complete instructions on citing and useful information on writing style and content can be found in the latest edition of the Publication Manual of the American Psychological Society. We have multiple copies in the Library in reference and on reserve; it's also worth considering buying your own if you are in the social sciences.